The Danish Shipowners’ Accident Insurance (UFDS) has hired a social worker to help seafarers return to the labour market after an accident at work. Navigating the sick pay system is one of the hurdles that the social worker can help injured employees overcome.

When seafarers have an accident at work, they can get really seriously hurt. They can sustain crush injuries, severe damage to arms or legs or mental health problems after traumatic experiences. Extended sick leave often follows, and employees may find it hard to even return to a working life at sea. The Danish Shipowners’ Accident Insurance (UFDS) has now hired a social worker to help seafarers who have sustained a work-related injury.

‘I’ve done my job well when a person takes back the helm of their own life and returns to the labour market in the best possible state. They may return to the same job at sea, but they could do something entirely different, such as a flexible job in an office,’ says social worker Luise Hougaard, who helps employees in the shipping companies insured with UFDS. 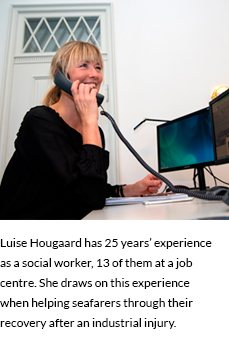 Job in the shipping company's office

It is by no means certain that seafarers can return to a job on board a ship if they have had a serious accident. However, there are other options.

‘Part-time positions and flexible jobs at sea are rare, and if you aren’t quite physically up to it, the going can be tough. So, if you have been seriously injured, retraining for a job in another industry might be a solution. Or you may be able to get a flexible job in the shipping company’s office or in a ferry terminal. My job is to help injured seafarers spot opportunities in a difficult situation,’ says Luise Hougaard.

An industrial accident at sea often leads to sick leave. This also kicks off the process of assessing the extent of the injury and clarifying what the employee is capable of and can manage. If an employee is off sick for more than four weeks, the case is passed on to the sick pay system while the person is still employed with the company. This is typically the time at which Luise Hougaard or UFDS’s claims officers contact the employee.

‘We try to contact the employee within the first four weeks of the injury. We call them and find out how they’re getting on. This is just as much to let them know we’re there if they need help. At this point, there’s usually little we can do for them. They may have their leg in plaster and are convalescing. But then we reach out to them again after a month or two.’

The main aim of the social worker's initial contact with seafarers insured with UFDS is to gain their trust and establish a good relationship with them. In fact, seafarers are under no obligation to talk to her.

‘This is an offer, and they are fully entitled to turn it down. So I have to put in some effort to gain their trust. I explain to injured employees that I’m a social worker affiliated with UDFS, and that we want to help them and their workplace, if relevant, with social guidance to ensure job retention. It’s a preventive measure, which clearly makes good financial sense for the insurance company, but UFDS also has a genuine desire to help people. Fortunately, a great many employees accept our offer and find it useful,’ says Luise Hougaard.

Being on sick leave is tough going

UFDS and Luise Hougaard find that they are helping seafarers a great deal navigate the sickness benefit system and find their way around the rules and regulations people encounter when on sick leave.

‘Going through the job centre process can be very stressful. Being on sick leave is tough. The job centre is an authority, and I’m a translator who can help injured employees understand their rights and options in the course of a process like this. These rights sometimes concern job retention, but can also relate to clarification of flexible job opportunities, and ultimately even the possibility of a disability pension, if all other options have been exhausted. I go over the various options so the person can return to something resembling a normal life.’

If a person is on long-term sick leave and has received daily sick benefits for 22 weeks, another set of rules comes into effect. The rules and regulations can be hard to understand for someone battling ill health and trying to get back on track.

‘Some simply lose sight of the big picture and become dispirited. Sometimes “minor” requirements are the last straw that makes people suddenly feel everything is impossible. In such situations, I help injured employees to find their way through the jungle of rules and deal with it so they can focus on themselves and on getting better. I accompany them to meetings at the job centre if necessary,’ says Luise Hougaard, who has worked for UFDS since mid-July 2019.

Seaman got a work placement

The social worker has handled a case involving a seaman who witnessed a serious accident on a ship and subsequently went on sick leave. He was suffering from PTSD and has received psychological help. As he is unlikely to return to sea in the near future, he is considering re-training and other job opportunities. In this connection he tried to get a work placement he had found with a company, but the job centre would not permit this.

‘I spoke to him and the job centre and pointed out that he was actually allowed to do this. Finally, his work placement was approved. It’s a matter of getting the job centre to see me as a co-player and cooperating partner and working out how we can help each other,’ explains Luise Hougaard, who, since qualifying as a social worker, has had 13 years’ experience working at a job centre and therefore knows her way around the system.

‘Sometimes I discuss our seafarers with job centre case workers who only have a year’s experience since qualifying as social workers. I can often point to some solutions or rules they either don’t know or are unaware of,’ she says.

On other occasions UFDS can pay for the course or certificate that will ultimately enable a person to move on or get a new job.

‘I generally find that most employers care about their employees and would like to have them back in some shape or form. They feel a responsibility for their people and thus want to help them as much as possible, even if it means welcoming them back in other roles or functions.’